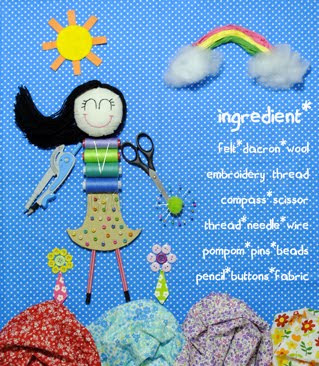 remember edward the scissors hand...??? a creepy unfinished creation, who has scissors for hands. The inventor (his dad) was inspired to make an artificial man, his final result was a humanlike young boy who had everything except for hands, but the inventor had a heart attack and died while in the act of creating a pair of real hands for Edward, leaving him "unfinished" forever.
and now meet her, Edna the crafty girl, made by a lotta crafty tools and a pack of love ;p if u wanna make your own Edna version just make it with the ingredient that i write it for ya :)

this is another part of the secret project, i know now it seem not kindda secret anymore, too much sneak peak,haha... it's because i just wanna share to you what's makes my day is full of happy stressness,haha... just pass it, happy holiday...

it's about: craft story

hihi... thanks angel, it's quite fun to use ur craftools to make this kind of creature,haha :)