some of u maybe already know that how i love the beatles sooooo mucho mucho ;p let me tell you the short story about my feeling with beatles. from now on i will make a reguler post about how much i love the beatles. a short story between me and the beatles :)
i don't know since when, but since i was little my Umi and Upi (mom and dad) is a singer and band player, they sing some beatles song so i'm so familiar with it. i live in a small city (Rembang-central Java), it's so hard to find beatles album, my first beatles album is ONE album, it's like the greatest hits of them. i play it again and again, and i start fallin and fallin with them. and then i move to Jogjakarta to study and have little much money to save to buy another album of them,haha... 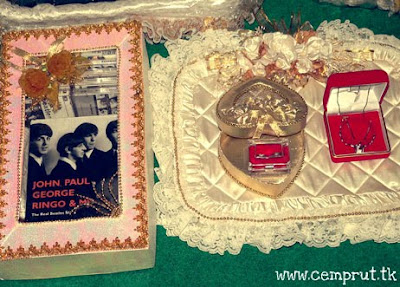 but the complete beatles albums of mine is i get from my super lovely Ay ;p when we were married i wanna the "mas kawin" from him: beatles complete albums and book of beatles. and when he give it to me with his love so i said: I DO...!!! haha...love u Ay :) 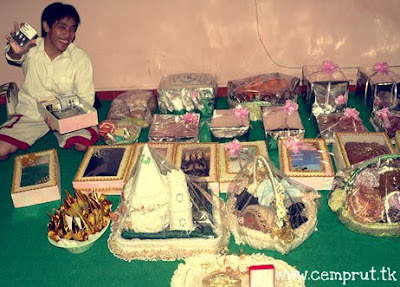 this is Ay with all the pretty thing (srah-srahan) that he wanna give it to me :) and i think his fav thing is the beatles album that he hold :) 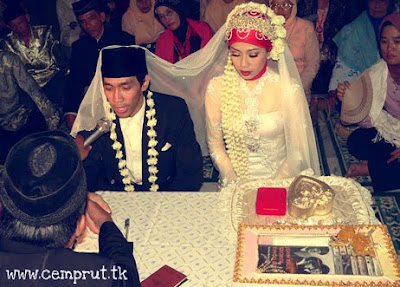 and this this when he said the promise (ijab kabul) to married me, in front of the beatles albums,haha... how can i'm not gonna said: I DO, haha... Ben Sen Sevi Ay :)

it's about: beatles, story

"oooo i need you love bebe..guess u know it's true..
hold me love...
ain't nothing but love babe eught days a week.."

what a cute and truely romantic love story!